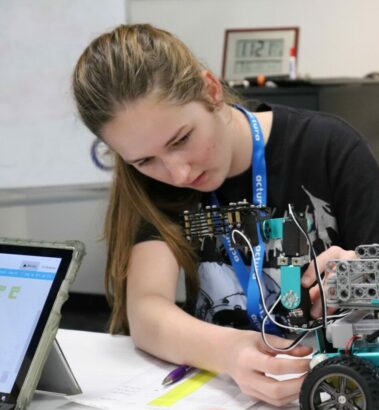 Through Actura’s FlipFun Activities and Workshops creativity in students can be unleashed while learning about robotics. The three-hour sessions are designed to pique interest with hands-on “fun” creative robotics activities with FlipRobot. The sessions have clear curriculum framework outcomes and focus on problem-based learning. Students and educators alike can learn about robotics and STEAM through various themed activities.

Topics in the FlipFun Activities and Workshops include:

Students explore autonomous driving, practising controlling vehicles to drive safely within lanes by applying infrared sensors. They monitor the vehicle to avoid collisions at intersections and reach destinations safely. They learn about Smart Cities and applications with robotics.

Robotic Dog Training enables students to program via a joystick to walk a puppy around and bark. They train their puppy by applying ultrasonic sensors to move forward or backward.

Rocket Lab has been signed as honorary Gold Sponsor of Actura’s global robotics competition that will bring together students from around the world. The students will grapple with the competition category of “Smart Cities” – dealing with such issues as global emissions, transport, travel, environmental impact and a consideration of the Autonomous Vehicle (AV) in alleviating the problems of our cities.

As the Gold Sponsor, Rocket Lab will be present at the Auckland competition to judge the award entries and will have a Special Award (dedicated in the name of the company). Actura is delighted to have Rocket Lab be the honorary Gold Sponsor of the OneWorld Robotics Competition.

A career in the aerospace industry can represent the pinnacle of STEAM education, and as the company operating the world’s only commercial small launch vehicle dedicated to small satellites, roles within Rocket Lab are highly sought after. Actura looks forward to a fruitful relationship, going forward with Rocket Lab.

What is Space Tourism?

Space Tourism, in simple terms, is the activity of travelling beyond Earth’s atmosphere for recreational reasons. It is also referred to as Citizen Space Exploration, Personal Spaceflight, or Commercial Human Spaceflight.

In science-fiction we are often witness to Space Tourism that functions in a similar way to tourism here on Earth. In these narratives, travelling to another planet for a vacation would seem to be as simple as travelling across continents or to another country for a few weeks.

While it may not be as simple as that, Space Tourism may not be quite as impossible as we think.

While Space Tourism may sound like science fiction, seven people have in fact already travelled into Space as tourists. All seven of these tourists travelled with the Russian Space Agency between 2001 and 2009, and payed for the privilege. Dennis Tito, American multimillionaire, became the first ever Space Tourist in 2001, flying to the International Space Station for a cool $20 million.

The Russian Space Agency, however, ceased its Space Tourism operations in 2010, and since then there have been no opportunities for the general population to leave Earth and explore beyond our atmosphere.

The Future of Space Tourism

While some are focussing on providing quick sub-orbital flights to paying customers, others have their sights set on trips to the moon, luxury space hotels, and even Martian colonies. These technologies are all in the process of being developed, fuelling competition between these companies and driving them to achieve more and more in record time.

While many of these are still a long-way off, within the next year it is widely believed that the next paying tourists will be buckling up and launching away from the Earth to experience the vastness of Space and try their hand at summersaults in zero-gravity. Blue Origin are set to launch tourists into space aboard their New Shepard rocket in early 2020, having already completed 10 successful unmanned test missions.

Tickets are not on sale yet though, and a price has not been announced. Virgin Galactic, however, has been selling seats aboard their SpaceShipTwo vehicle at US$250,000 each, with already over 600 people putting down deposits.

As more and more companies enter the Tourism game and technologies improve, these prices will be driven down though, potentially to the point were the general populace will be able to afford such a trip.

With Space Tourism on the brink of taking off, and NASA’s plans to return to the Moon, and then on to Mars, we might not be as far away from that science-fiction picture of holidaying off-world as we think.

This in turn opens up a whole new world of professions. Space Tour Guides, Space Travel Agents, Spacecraft Attendants, Space Insurance Brokers, Space Activity Coordinators, and whatever else you can think of!

While not on the cards for tomorrow, we may be moving towards a future of holiday resorts on the Moon, guided tours of the Solar System, and adventure holidays to Mars.

Last year, some of our Senior Space School students were challenged to develop a Space Tourism company for their ChallengeX Presentations. From Spa Resorts to Eco-Tourism, students showed creativity and initiative by developing robust products that were economically and practically viable, proving once again that they are the leaders of tomorrow.

CASE Space School Graduates will be the ones driving change in the next generation, and we look forward to following their progress and future careers.